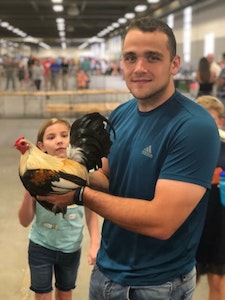 Gathering from around the region, competitors are excited to show off their prized birds at the Kentucky State Fair. Byron Fairchild, from Flat Gap, Kentucky, has been a poultry enthusiast his entire life, and watched poultry competitions with his wife for several years before deciding to compete himself.

Being the only exhibitor that shows the rare American Game Bantams, Fairchild’s unique chickens differ from the average English Game Bantams most exhibitors contend with. Fairchild said the competition is fierce, as a lot of preparation and dedication goes into all the birds being shown.

Eggs are strategically hatched in January, so that by August the chickens will be fully matured. With the first priority being the chicken’s health, the early months are about correct nutrition and raising the birds properly. The last few months before the contest are about keeping the bird’s feathers in place and picking the right chickens that meet the standard of perfection.

“Proudest moment would be on Saturday mornings of the show when the ribbons are placed on the cages, and all your work for the year is accomplished,” Fairchild said.

Fairchild looks forward to the Fair every year, as it has become tradition for his friends and family to come and support his birds. The 2019 poultry show is August 15-18. The Kentucky State Fair runs August 15-25 at the Kentucky Exposition Center in Louisville, Kentucky.