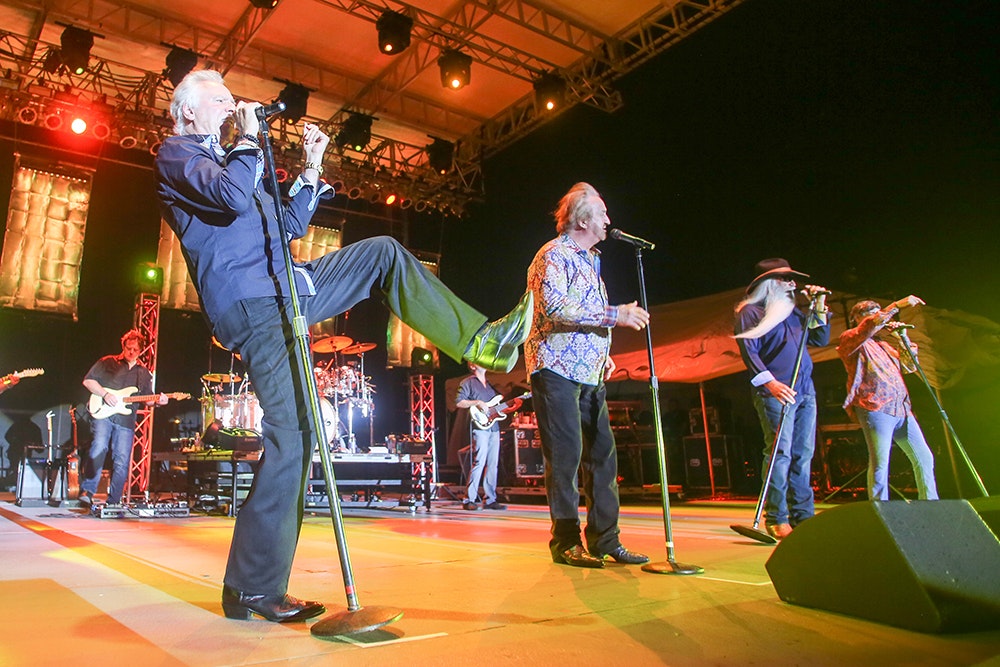 The Kentucky State Fair announced GenCanna as the presenting sponsor of this year’s summer celebration as well as the lineup of Texas Roadhouse Concert Series at a press conference today.

“The state fair is all about two things GenCanna cares deeply about- Kentucky and agriculture,” said Matty Mangone-Miranda, CEO of GenCanna. “Hemp production, both in agriculture and science, has a promising future in Kentucky. We’re proud to help showcase the great work done here in the Commonwealth as the presenting sponsor of the 2019 Kentucky State Fair.”

“Through partnerships with successful Kentucky-based businesses like GenCanna and Texas Roadhouse, we’ll be able to make the 2019 Kentucky State Fair a wonderful experience to remember,” said David S. Beck, President and CEO of Kentucky Venues.

Held August 15-25 during the Kentucky State Fair presented by GenCanna, the Texas Roadhouse Concert Series features a wide range of musical artists with a different concert every night, for a total of 26 bands. This year all concerts are free with paid gate admission.

Kentucky band Montgomery Gentry charted 14 Billboard Top 10 singles on the country charts including “Where I Come From,” “Something To Be Proud Of” and “Lucky Man” and sold millions of albums around the world. After many years as a duo, Troy Gentry tragically died in a helicopter crash in 2017. Before his death, Montgomery Gentry recorded their latest album, “Here’s to You” which was dedicated to Gentry’s memory. The album debuted at No. 3 on Top Country Album chart. Eddie Montgomery continues touring, continuing the iconic duos music and legacy. www.montgomerygentry.com

Marion County native Layla Spring rose to fame on Season 16 of American Idol. She made the top 24 on her season of the show. www.facebook.com/laylaspringmusic

Sheila E began her career as a percussionist and singer for The George Duke Band before embarking on a successful solo career. Her first solo album “The Glamorous Life” debuted to critical acclaim and was certified gold by the RCAA. Her second album “Romance 1600” also reached gold certification. Shelia E is known as the Queen of Percussion. www.sheilae.com

Hailing from Edmonton, Kentucky – Black Stone Cherry hits the stage after releasing their sixth album, “Family Tree.” Known for their hard-rocking, southern-fried songs, the group is popular overseas as well, with their last five albums hitting No. 1 on the U.K. rock charts. www.blackstonecherry.com

At the age 11 Tyler Bryant & The Shakedown knew he wanted to be a musician. After selling his Christmas present, a dirtbike, he bought his first guitar. Guitarist Vince Gill said Bryant was, “Hands down a future guitar god.”

The Josephines combine alternative, rock and country in a sound that is entirely their own. These Kentucky musicians from just down I-65 in Bowling Green are the embodiment of the country rebel spirit.

Sunday, Aug. 18, 8 p.m.
A country and gospel quartet, The Oak Ridge Boys have been entertaining Kentucky State Fair audiences for 44 years. The group has scored 12 gold, three platinum and one double platinum album; earned Grammy, Country Music Association and Academy of Country Music Awards; and were recently inducted into the Country Music Hall of Fame. www.oakridgeboys.com

Best known for his patriotic song “God Bless the U.S.A.” Lee Greenwood is an accomplished country music artist. He has released more than 20 major-label albums and charted more than 25 singles on the Billboard country music charts. His No. 1 hits include “Somebody’s Gonna Love You,” “Going, Going, Gone” and “Dixie Road.” www.leegreenwood.com

Monday, Aug. 19, 8 p.m.
Australian brothers Joel and Luke Smallbone hit the music scene in 2012 as for KING & COUNTRY, winning fans and Billboard’s New Artists to Watch. Their 2018 album “Burn the Ships” hit No. 1 on the U.S. Christian charts with two singles hitting the top of the U.S. Christian Airplay chart. If the duo looks familiar, they have performed on “The View,” “The Today Show,” “The Tonight Show” and “Jimmy Kimmel Live.” www.forkingandcountry.com

The Young Escape, an electronic pop band, consists of siblings Ryan, McKenna, Kyrsten, and Luke Johns. The band’s debut single “Good Life” rose to the top of the Billboard Hot AC chart followed shortly by their second No. 1 single “Love Me Like You.” theyoungescape.com

Tuesday, Aug. 20, 8 p.m.
Back with the original lead singer, Herman’s Hermits starring Peter Noone returns with many of your favorite hits from the 60s. After their debut album rose to No. 2 on the Billboard Top 200, Herman’s Hermits had 11 hits across different charts including “I’m Henry VIII, I Am,” “Can’t You Hear My Heartbeat” and “I’m into Something Good.” peternoone.com

Gary Lewis and the Playboys are best known for their No. 1 single “This Diamond Ring.” Their first seven releases reached the top 10 on the Billboard Hot 100. Hits include “Everybody Loves a Clown” and “Sure Gonna Miss Her.” www.garylewisandtheplayboys.com

Mitch Ryder is has recorded more than two dozen albums over more than four decades. He is best known for hits “Devil with a Blue Dress On” and Sock It to Me-Baby.”

Granger Smith also known by his alter ego Earl Dibbles Jr. is an American country music singer and songwriter. He has released nine studio albums, one live album, and one EP. His latest two albums, “Remington” and “When the Good Guys Win” reached No. 3 and No. 2 on the U.S. County chart. His BMI Country Award winning song “Backroads Song” peaked at No. 1 on the U.S. Country Airplay chart. He was also nominated for an iHeartRadio Music Award for Best New Country Artist. www.grangersmith.com
www.earldibblesjr.com

Raised in a small town in Tennessee, Brandon Lay is a country singer/songwriter with a rock and roll spirit. Recognized for his songwriting ability, Lay won the Harold Adamson Lyric Award in 2015. He has gained a following in college towns and his autobiographical single “Speakers, Bleachers and Preachers” has more than 600,000 streams on the Spotify U.S. Viral Chart. www.brandonlay.com

The Mowgli’s rose to prominence when their debut single “San Francisco” peaked at No. 2 on the Adult Alternative Songs chart and was named the single of the week on iTunes. The alternative band hailing out of California has performed on Jimmy Kimmel Live and Conan. Their first studio album “Waiting for the Dawn” reached No. 2 on the U.S. Heatseekers chart with the follow-up album “Kits in Love” rising to the top of the charts. www.themowglis.net

One of Spotify’s Spotlight on 2016 Country Artists, Dylan Scott’s respect for traditional country, embrace of modern genres, unique voice and warm personality have made him a favorite with fans. Numerous singles have charted on the U.S. Country Airplay chart with “My Girl” reaching the No. 1 spot and “Hooked” rising to No. 2. His debut album reached the No. 5 spot on the U.S. Country chart. dylanscottcountry.com

Best known for his single, “Drunk Me,” which hit No. 2 on the U.S. Country Airplay chart, Mitchell Tenpenny has released one studio album and two extended plays. His 2017 EP “Linden Ave” charted at No. 10 on Billboard’s Independent Albums, No. 6 in Heatseeker Albums and No. 12 in Country Albums.

Vince Neil, the legendary front man of Mötley Crüe, sings many of the greatest rock songs of a generation including “Wild Side”, “Home Sweet Home,” and “Girls, Girls, Girls.” Those are just a few of the more than 22 hit singles the band achieved during their run. Despite Mötley Crüe’s departure from the rock world, Neil has not slowed down. He performs all the classic Mötley Crüe hits with select cuts from his three solo albums on “The Legacy Continues Tour.” www.vinceneil.info

KIX’s popularity may have peaked in the 1980s, but they’re still rocking just as hard. Best known for their platinum certificated, fourth album, “Blow My Fuse.” Their power ballad “Don’t Close Your Eyes” peaked at No. 11 on the Billboard Hot 100 chart. www.kixband.com

Since releasing her first album in 2015, Lauren Daigle quickly took over the Christian Contemporary scene. She was awarded New Artist of the Year at the 2015 GMA Dove Awards and also took home the Song of the Year Award. Her album, “How Can It Be,” was nominated for a 2016 Grammy Award for Best Contemporary Christian Music Album. Since then, she has won four additional Dove Awards, two Grammy Awards, two American Music Awards and racked up 11 nominations. All three of her albums have reached No. 1 on the U.S. Christian charts with six singles reaching the No. 1 spot. laurendaigle.com

AHI is an award-winning Canadian folk singer-songwriter who won the Canadian Songwriting Competition as well as the Stingray Rising Star Award at the Folk Music Ontario conference. His album “In Our Times” was nominated for a Juno Award for Contemporary Roots Album of the Year. ahimusic.com

The 2019 Kentucky State Fair is Aug. 15-25 at the Kentucky Exposition Center. For more information,