Kentucky State Fair Celebrates the Best of the Bluegrass 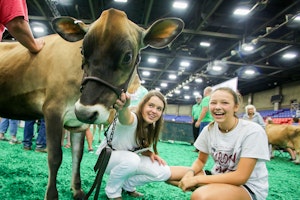 The Kentucky State Fair celebrated another successful year, bringing together Kentuckians from all 120 counties to enjoy 11-days of concerts, agriculture, animals, education and more.

“The Kentucky State Fair highlights the best the bluegrass state has to offer and we’re proud to be where Kentucky comes together. This year all 120 counties were represented, with Fairgoers purchasing tickets from Fulton to Pike County,” said David Beck, President and CEO of Kentucky Venues.

The total number of fairgoers in 2019 was 589,170 during the Fair’s 11-day run. The lower attendance numbers can be attributed to numerous factors including extremely hot weather, not recording Kentucky Kingdom visitors and the new minor attendance policy. Revenue increased this year over the previous year.

Eleven days of music and more than 26 bands were all included with admission. The Texas Roadhouse Concert Series was the highlight for many guests. A variety of musical genres were represented including country, oldies, rock, and Christian. Nearly 100,000 people attended the Texas Roadhouse Concert Series during the Fair with a record-breaking 11,000 visitors alone for Lauren Daigle.

For the first time in Kentucky State Fair history, a hemp company was named the presenting sponsor of the Fair. The partnership with GenCanna highlights the emerging hemp industry in Kentucky and also endorsed the Kentucky State Fair as a premiere agriculture event. AgLand returned with a new programming stage to compliment it’s nearly two acres of interactive and educational exhibits related to Kentucky agriculture.

The Kentucky State Fair is more than just a celebration, it’s the largest classroom in Kentucky. From the educational agriculture exhibits in AgLand to the Kentucky Remembers WWII exhibit, thousands of students from across the state took educational trips to the Fair. This year the Kentucky State Fair offered a free field trip experience for school groups and school attendance skyrocketed by 72% with nearly 13,000 students and chaperones visiting the Fair.

World’s Championship Horse Show
Held in conjunction with the Kentucky State Fair, the World’s Championship Horse Show is recognized as the most prestigious Saddlebred show in the world. A new Hunter Country Pleasure division was added this year, bringing additional competitors and prizes to the esteemed event. Two thousand horses competed for Grand Champion titles and over $1 million in prizes.