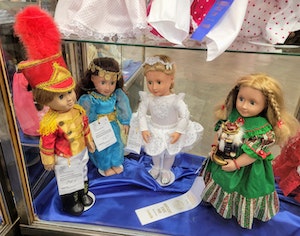 Cora Flispart knows her way around a sewing needle. As a four-year-old Cora started sewing by making clothes for her dolls. After her mother threaded the needle, Cora would go to work attaching fabric to her dolls making handcrafted outfits. Whenever they needed a wardrobe change, she would cut off the old fabric and start again.

For years she worked as a costumer at New Albany High School and Hazelwood Middle School. Back in 2014 her costume work traveled to the National Theater Festival in Lincoln Nebraska when Hazelwood Middle School’s theater program performed Antigone. There were many misadventures in her years of theater work, from an exploding serger to iron-on decorations flying off when performers danced only for Cora and her trusty needle to save the show.

Nowadays she mostly sews for her old theater students. From altering wedding dresses to creating 19 custom Lord of the Rings capes, her former students appreciate the quality of her work. When faced with a challenge, Cora often solves problems that lesser sewists might think impossible.

An award-winning crafter, Cora has been racking up ribbons at the Kentucky State Fair for many years. She won her first blue ribbon with a decorated Christmas tree skirt and fittingly her first Best in Show was in the doll clothing competition. An exhibitor can only win Best in Show once every four years. Cora has won three times.

From Competing at the Kentucky State Fair to Judging

Not only does Cora compete in the Kentucky State Fair, she uses her expertise to judge at county fairs in her home state of Indiana.

“When judging county fairs, I look at the workmanship of the article, from cutting thread tails in sewing to weaving the thread ends in knitting and crocheting. When I go back to pick the winners, I look at the difficulty of making the article. If everything is equal, I choose the one I like the best, be it the color of the item or the extras placed on the item,” said Cora.